My drive to Ozone Falls was basically worthless, photographically speaking. I wasn't expecting much, considering it was after noon, and sunny, and hot, and dry, but I went anyway. You live, you learn.

The day wasn't a total loss, I ran into a praying mantis while I was walking Scipio. I got some pictures on the 100/2.8 USM Macro, most at f/8 and around 1/200th. You should be able to click on them to make them bigger... 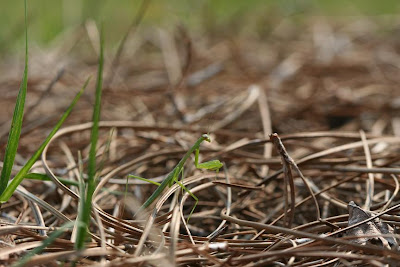 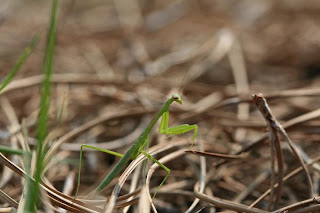 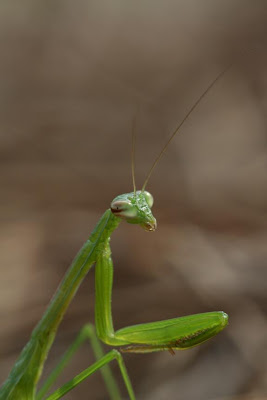 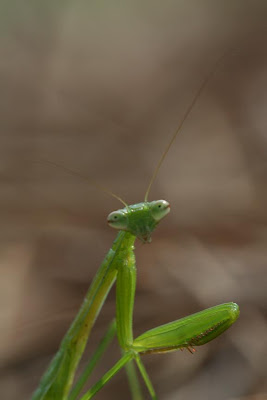 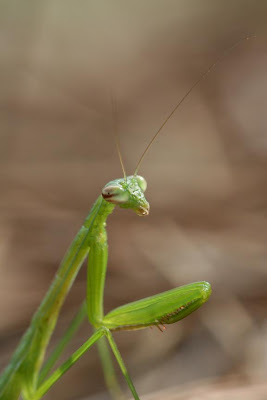 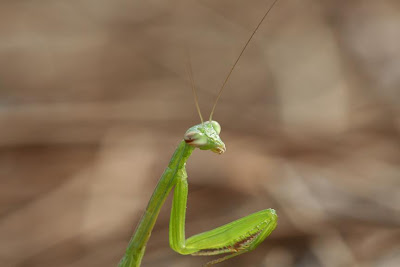 Today's drivings took me on a 281 mile circuit from Knoxville, TN around the edge of Great Smokies National Park all the way back to Knoxville. My plan had me going to Fontana Dam and to Lakeview Drive (the road to nowhere) via US 129. My plans changed.
Ordinarily, I would never get on the Dragon (http://www.tailofthedragon.com/maps_dragon_road.html) on a weekend, but since it is the only route to Fontana Dam and Bryson City from my current neck of the woods, I had to chance it. The "Dragon" is the name that has been given to US 129, a VERY popular road among motorcycling circles due to the insane number of turns. Along with the Cherohala Skyway, NC 28, and a few other locals roads, the Dragon is one of the best rides in America. Being buzzed by hundreds of motorcycles is enough to drive any car driver a little crazy, along with the tight turns, but I made a mjor mistake that made my ride on the Dragon a ton longer and more wild than I had ever bargained for. I forgot to check the events calender, and went on a bicycle race day. Poop.
The Ford Taurus is not known for its manueverability, or its mountain endurance, and as such my ride on the Dragon was both terrifying and nauseating. Dodging bicycles is hard enough on a road where you cannot see ten feet in front of you due to the turns. It gets nearly impossible when you add motorcycles dodging in and out of traffic. I was doing constant 0->30->0 accelerations, driving with my head under the rear-view mirror to see the bicyclists in the corners, and riding with my loud hazards on.
The Dragon is, however, worth all the trouble. Huge dropoffs often showcase interesting structures built by the TVA and other power entities, like pumped storage hydro plants, green limstone lakes, and plenty of dams. One such dropoff shows a arched dam (Calderwood Dam: http://www.janandpat.net/dams/alcoa/calderwood.htm) from hundreds of feet in the air, from the back, so you see a huge drop, with an arch holding back another huge drop. The whole road looks more like the Pacific Northwest than the Southeast. Powerlines run in and out of gorges, and some massive lines sit on plyons in the middle of lakes. I tried to get pictures, but the traffic made that impossible. 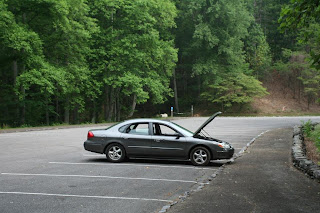 Needless to say, once we finally got to Fontana Dam, the Taurus needed a little break. The engine temperature was fine, but my transmission fluid had to be getting near the scorch point, and I was loosing my rear brakes from heat. After a nice twenty minute break parked on the far side of the dam, the car was fine again, but I scared the crap out of myself and some other visitors by laying accidentally on my horn when I went to put my camera away. Fontana dam is the highest dam east of the Rockies, according to the TVA. It is looking a little beat up, and the road that runs on the top (which carries the Appalacian Trail) is all cracked and beat up. Since it doesn't really go anywhere right now, it isn't a huge deal. The weather was really stinking it up today, it was cloudy and trying to rain all day. It was hot and humid enough for some decent thunderstorms, but none came. Just enough clouds to ruin my pictures (hence why no big versions) but not enough to bring any more much needed rain. Every reservoir I passed was 10-20 feet below normal waterline. Looks really weird in a place with so much exposed limstone. Very surreal.
From the dam, I set out down NC 28 towards Bryson City to find the other planned location for today, Lakeview Drive, the other big road to nowhere in the Smokies. Well, it is so unused that I couldn't find it without a map, and I didn't have a map. Decided to loop around and go to Cataloochee instead, that way this trip would cut down on the number of runs I need to make this weekened to the park.
I decided to avoid Bryson City and Cherokee, and head around the outside of the mountains on the highway instead. It would have been faster, if I had remembered that I needed to take US 276 and not US 19 to Cataloochee. Eventually I got to the road to Cataloochee, and headed up another winding road.
Cataloochee Valley is situated on the far eastern side of the park, 7-10 miles in from I-40, and 30 miles from the nearest town in Tennessee. Both approaches require a dirt/gravel road ride, but the NC side is substantially shorter, and my abused car needed the break. After several switchbacks on the washboard road, I hit the actual road to Cataloochee. This road looks like 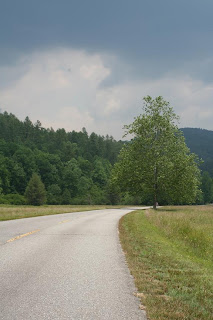 another road to nowhere, and a two-lane yellow lined road terminates into a long dirt road in either direction, and a grassy gated right-of-way where the road to the Interstate was probably intended to be.
The valley was a lot less interesting than I was expecting. Smaller, and less open than Cades Cove. The big plus to Cataloochee is that is is totally empty most of the year. Oh, and they released the Elk there a few years back.
I didn't follow the two dirt roads that branched off of the main valley road because I needed to head back. I had an appointment to check in at 4PM or my emergency contact was going to call the rangers out for me to track me down. Since my cell phone works absolutely nowhere now, not even in downtown Knoxville, I needed to get back to the temporary apartment and the landline that it happens to have. 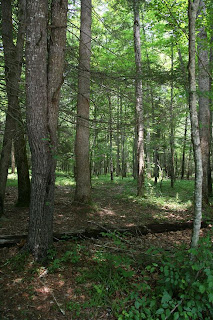 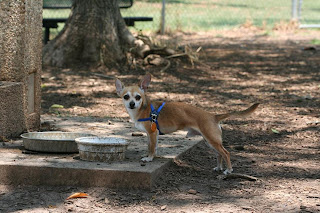 One of the things I like about Knoxville is that this city has a small dog park in a nearby suburban area. Birmingham has no such feature. The dog park, of course, is a wonderful place for the indoor dog, because it is the only place where he/she ever gets to really wander around off-leash, at least without being chased by an irritated human being. 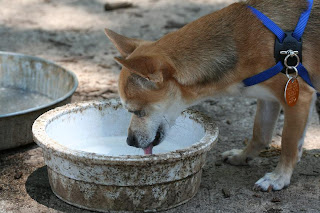 Scipio, being the sort of small dog who actually knows he is a dog, and doesn't have a complex that makes him think he is human, really digs the dog park.

For some reason they put in a dog water fountain AND left a whole bunch of rusty bowls laying around for dirty water to collect in. Naturally, being a dog, Scipio went for the fithiest water he could find. 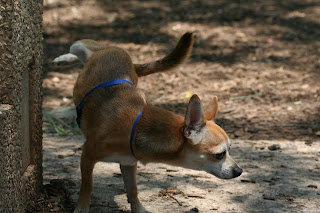 He was less keen on the water fountain, but found a use for it, nonetheless. 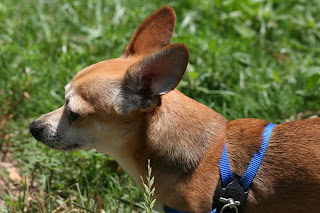 While you can't see it in this tiny little crop, this shot really sold me on the sharpness of my 100/2.8 USM Macro lens. 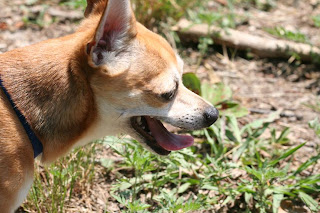 You know it is hot when the Chihuahua is panting.
Posted by JPS at 1:44 PM No comments: 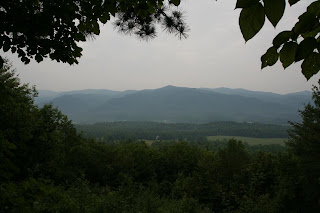 Today's excursion started as a scouting mission for sunrise locations in Cades Cove, in Great Smoky Mountains National Park. As such, this mission was a failure. I just couldn't endure the full 11 miles of tourons taking tiny pictures of deer with point and shoot cameras. I've seen a deer before, and I don't find it any more exciting than seeing a rat or raccoon. I try to avoid hitting them with my car, but beyond that, I have no particular interest in them. 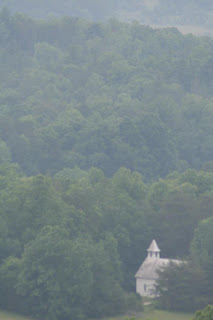 I ditched onto Rich Mountain road when I encountered it, rather than looping back when I finished the full Cades Cove loop, which had been the place. Rich Mountain Road is a one-way, one-lane, narrow and winding, mostly gravel, climb from Cades Cove over towards Townsend. I was expecting switchbacks, but I was impressed to see the road I had looped around tw0 turns below still visible beneath me.

There are a few cut-out views on Rich Mountain road (small holes, much like on Balsam Mountain Road, which is a similar ride) that show Cades Cove from above. I took a few (lousy) pictures in the drab conditions, showing a church down in the cove.

After about 45 minutes of slow travel in 1st gear, I hit the park boundary, and the road quickly switched to rough pavement, and many houses in various states of existance began to line the road, including one nestled into a switchback. Eventually, I emerged on the road that led back to US 321, and after several three-point turns to get going the right direction, I found US 321 and headed towards the Foothills Parkway.
The Foothills Parkway is one of several "Roads to Nowhere" in the SouthEast, and one of two in the Smokies. In reality, the two completed segments do go somewhere, but the road itself is not complete, so it doesn't really go where it is supposed to. The progress of the road has been stymied by environmentalists and budgetary issues, and it currently runs from US 321 to US 129 (Walland to Chilhowee) on the west side of the Smokies and from Cosby to I-40 on the north side. I was travelling the US 321 to 129 segment. The road is very quiet, calm, and lightly used by tourists. Like the Cherohala Skyway, it actually has sped up local commute times considerably, so it does serve some purpose other than being a scenic route. From its overlooks you can get an excellent view of 5000ft+ peaks, and the Tennessee River Valley. It is also a great place to see wild turkeys. On my last visit I saw no less than 20 turkeys, including several juveniles.
I was planning to head over to Fontana Dam, but a mileage sign at the 129 terminus of the Foothills Parkway made me decide it was too far. I've driven down US-129 before, and I had no desire to vomit today. The road is a favorite of motorcyclists, but large sedan drivers will probably be carsick within minutes due to the twisting nature of the road. Along with the Cherohala Skyway it forms a massive loop that contains some of the most winding roads in America, hence why there are so many motorcycles around. I decided again to head down Happy Valley Road which is on the opposite side of the lake inlet (huge and secluded lake here) from the Foothills Parkway terminus.
This road runs through Happy Valley, which I imagine is what Cades Cove would have looked like had the park service not taken possession of it. Lots of nice cabins, lots of not so nice cabins, open fields and some forest too, lots of old cars collecting rust in yard collections. Neat place.
My return to Knoxville (where I am temporarily staying) on US-129 was uneventful and unremarkable.